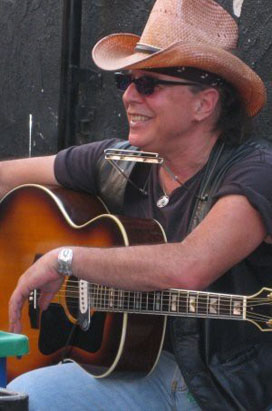 Austin/SoCal based singer-songwriter and multi-instrumentalist Cody LePow returns to the Bowlful of Blues with an acoustic set.

Guitarist, vocalist and harmonica player Cody LePow has combined the many influences in his life – from sweet Ojai ranch daydreams to his “second home” in Austin, Texas – and has masterfully integrated his love of vintage guitars and traditional folk blues heroes into a unique soulful sound all his own. This singer/songwriter, once tagged the “West Coast Troubadour” by the L.A. County Examiner, has truly achieved his own sense of style. Paolo Caru, editor of Europe’s Buscadero Music Magazine calls LePow “a great and valuable talent on the horizon.” Patrick Schwarz , of Night Moves Magazine says “Cody’s sound has strong potential in becoming signature in the years to come.”

Cody has shared the stage with great blues artists like Bonnie Raitt, Taj Mahal, Robben Ford, Coco Montoya, Kid Ramos, Finis Tasby, and the Mannish Boys. He has performed with Dwight Yoakam, Lenny Kravitz, and members of the Eagles and the Pointer Sisters. Cody’s musical ventures have taken him to such popular venues as The House of Blues, The Troubadour, The Whiskey, B.B. King’s, The Palomino, Ventura Theater, Belmont Station, Blue Café, and the Café Boogaloo, as well as festivals and fairs across the country. His original songs have appeared on various movie and TV soundtracks.

As a solo artist, Cody was the 2008 International Blues Competition Regional Winner for L.A. County, traveling to Memphis to compete in the Blues Foundation ceremonies.